March 02 I said right here, I would be getting more P.I.L on vinyl, and I did, although his time it came in a different bag. I was in London and found myself with about an hour to spare so I wandered off oxford street an into Soho where Google maps assured me I would find ‘Sister Ray’ records (they have a 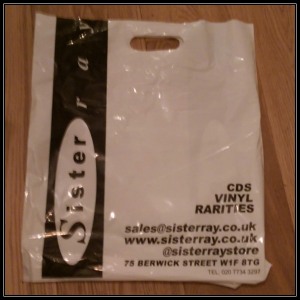 facebook: https://www.facebook.com/sisterrayrecords). I arrived to find the store closed down, and then my disappointment was gone as I saw they had just moved to the other side of the road. Looking at the bag I see they also have a website: http://www.sisterray.co.uk (not much there at the moment though).

Anyway, moving on, when I was still a young man I did have the 7″ single ‘Public Image’ but I couldn’t afford the album, which is a good thing as I wouldn’t have liked it then, I’m pretty sure of that. The single was reminiscent of the Sex Pistols, the rest of the album wasn’t. I listened to it years later and loved it though. It remains probably my favourite P.I.L album. There is a pretty interesting wiki page about the album here: http://en.wikipedia.org/wiki/Public_Image:_First_Issue

I only bought two albums at Sister Ray, both P.I.L, both in great condition, here is that first one:

And here is the second, another good record. I do think that in many quarters they aren’t given the credit that perhaps they should receive, although it certainly isn’t for all ears, I get that, it is not thrown together in an anarchic way, there are elements of all manner of different styles of music that influence these recordings and I find it to all be rather cleverly constructed:

Finally a more recent offering, that I am not too sure about as yet, I haven’t listened to it enough, this one was £13 from HMV.