I was in town today not looking for records, nor intending to look, but as I was passing the 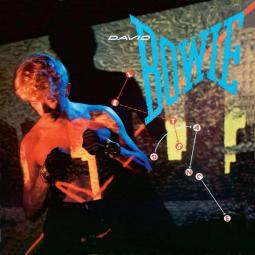 record shop I thought I’d just nip in, and I found ‘Let’s Dance’ by David Bowie for £4, which is about right as it isn’t exactly rare, but I didn’t have it, now I do. I did have a copy when it was originally released back in 1983 but have no idea what happened to it. At some point, when I put all my records away, I must have misplaced it, along with several others. They may turn up some day.

It’s an odd one as an album. I know that Bowie sat down with Nile Rodgers and wanted hits, which there were of course and it was, in many ways, another comeback for Bowie in a career full of them. It had been 3 year since the release of Scary Monsters and Let’s Dance was quite a departure, but my favourite track has always been ‘Cat People’, which doesn’t really seem to fit on the album, and may well have been included only due it appearing on the soundtrack to the film. The album is Bowie’s biggest selling to date, with around 7 million copies sold, which, to be honest, doesn’t seem that many as it felt like everybody had a copy in ’83, though obviously not.

I remember sitting up late one night recording music videos on VHS from the BBC who used to have late night Old Grey Whistle Test style music shows that would go on for several hours. I recorded ‘Let’s Dance’ amongst others, and have seen the video so many times I probably never need to see it ever again, but I’ve included what I could find at the bottom of this post.

Overall it’s a pretty good album, but even after all these years, I am so familiar with it from over playing that I have trouble really appreciating it. I did quote like hearing ‘Ricochet’ again though as I don’t recall liking it all that much at the time, but now, I rather do.