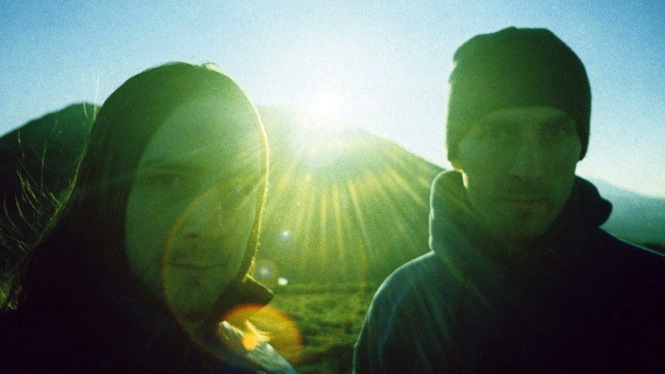 BoC’s second studio album, Geogaddi, was released in 2002. I had it on MP3 for years and turned to it when I needed to concentrate on something, not because it is background music, but because I had come to know it so well. As I have fallen back into the habit of buying vinyl I decided to pick it up when I saw it in the record store as a triple gatefold (I don’t know what the triple of a gatefold is, Tri-fold?). The album itself is a series of tracks interspersed with vignettes, such as ‘Dandelion’, which contains a long sample of Leslie Nielsen narrating a documentary on the Galapagos Islands titled ‘Dive to the Edge of Creation’:

The Galapagos Islands are known as the place where Charles Darwin constructed his initial theories of evolution and began the writing for the Origin of Species. The dandelion that is referred to in the sample is not a flower, a fish, or a lava formation, but is instead a cluster of organisms that is so complex that much of its biology is still unknown. These “ocean dandelions” are a multitude of different organisms that come together and work for a singular purpose. All this in 1 minute and 15 seconds of the album.

BoC are a duo from Scotland, brothers in fact, Mike Sandison and Marcus Eoin. They started young, experimenting with recording techniques from around the age of 10, layering cut up samples in a tape machine of found sounds over their own music. As they hit their teenage years they were in several bands until, in 1986 Marcus was invited to join Mike’s band, which became Boards of Canada. They were named after the TV documentaries by the National Film Board of Canada that, apparently, they saw as children.

‘Geogaddi’ as an album title does, according to BoC, have a meaning but they have not disclosed what it is, preferring instead to allow the listener to decide for themselves, me, I have no real idea, other than Geo is taken from the Greek word for “ground” or “earth” (ge), and is common to many words dealing with the Earth, such as geology. Gaddi is the name of a nomadic Hindu tribe from Himachal Pradesh, in northwestern India, also the surname of two father-and-son Italian painters of the early Renaissance, Taddeo Gaddi (c.1300-1366), and Agnolo Gaddi (c. 1350-1396). The work of both artists is largely concerned with angels, saints, and the Madonna. Gad is a Biblical name, belonging to one of the Tribes of Israel, a son of Jacob, and a prophet of David. Gad was also the name of an ancient pagan god worshipped during the Babylonian exile in the sixth century BCE. Gad itself refers to luck in Hebrew; its root is in the ancient Hebrew term for to divide or to share (as in fate being “meted out”). So maybe, just maybe, the title refers to the relationship between the Earth and Religion, but it’s probably just something they made up!

Mike Sandison: “Usually, our titles are self-explanatory, but this record’s title is a composite that has more than one meaning. We have a meaning we understand from it, but it’s up to listeners to choose their own meaning. I suppose the nature thing has an indirect effect on us while we’re writing, because we’re out here in the country most of the time. We’re both heavily interested in science, too, which crosses over into nature and probably comes through in the music.”

There have been many theories about the album, mainly around themes of Satanism, which aren’t helped by the running time being 66 minutes and 6 seconds, although they have already admitted that they did this deliberately on the suggestion of Steve Beckett as they thought it would be funny.

“When we were discussing the length of the silence [Warp Records owner] Steve Beckett actually suggested to take it to a total 66 minutes 6 seconds, because then everyone would think it’s the devil who made the album. And we just laughed.”

If anything, the music does seem to me to be about the links between mathematics, the natural world, science and religion. For example, the short opening track, ‘Ready let’s go’ contains a recording of a radio signal from Jupiter called an “S-Burst”, which has been slowed right down. These S-Burts sound like a handful to pebbles thrown on a tin roof (or popcorn being cooked). The bursts each last for a only a few thousandths of a second and occur at rates as high as several dozen per second. Then we have ‘Music is Math’, BoC have expressed on numerous occasions their interest in the links between music and mathematics and this particular track is, apparently, a musical palindrome. ‘Gyroscope’ contains samples the Conet Project which compiled various recordings of “number stations” and shortwave radio transmissions. And so on and so forth. You can look into the tracks on this album as deeply as you like and you will find things about the tracks that you may not have originally realised where there, but you can also listen to the whole thing as a rather pleasant musical experience and not worry about any of the themes that are woven through it.

I certainly don’t believe that this is a ‘Satanic’ album, it may be touched upon but in context with the the other themes and not as an overall theme in itself. Furthermore, so what if it is? As I don’t believe in all that it makes no difference to me.

Oh, and of course, there is a lot of backwards bits and pieces on the album which is something the Devil loves, he’s a bit of a DJ in that regards.

Here’s a series of videos that make up the entire album, which somebody else put together, which saves me doing it.