Last Thursday night I went to Warwick Arts Centre to see Godspeed You! Black Emperor on the first leg of their UK/European tour at the Butterworth Hall, which apparently holds 1780 people, but I would have a guess at there being maybe 900 there last night, it certainly wasn’t full. I was fine with this as I was in the balcony and had almost a whole row to myself.

The support band was Dead Rat Orchestra who were really very interesting and I may well seek out some more of their music. The two members there last night performed for around 25 minutes and it was a mixture of 16th and 17th century folk songs played on a number of acoustic instruments (banjo, a thumb piano, harmonium, a bell on a string in a bucket?) but with a laptop adding sounds and textures. I honestly didn’t think I was going to like it at first as it does sound quite awful as a concept, but after a while it draws you in and it was much more interesting to listen to and experience than initial impressions suggested.

I had a listen to their album, ‘The Guga Hunters of Ness’, which bears only a passing resemblance to what I heard last night, though this is understandable as it was recorded as the soundtrack to Mike Day’s film for the BBC which documented the endangered tradition of the Gannet Hunt in the Outer Hebrides. I like it. Here it is:

And this is a one of several videos available, though there were only two members playing on Thursday:

GYBE wandered on to stage to a deep hum and slowly picked up instruments, initially a double bass and violin, joined by percussion and then guitars and other bits and pieces. I can’t claim to be any kind of expert on GYBE, so I have no idea who the personnel were but it was probably something like this:

There were 2 drummers, 3 guitarists, 2 bass players and a violinist, so that seems about right.

I can’t provide a set list either as they played for an hour and three minutes before there was a noticeable pause for crowd appreciation and though I recognised the music from previous listening, I don’t really know the track names. I do think they did ‘Piss Crowns Are Trebled’ from latest release, ‘Asunder, Sweet and Other Distress’ but am not entirely sure. What I can tell you is that I fully understand why the majority of people don’t get GYBE, it can sound like meaningless noise, if you are not paying attention, but in amongst the repetitive barrage of sound there are rather intricate little melodies that rise to the top and then disappear back down into the depths of the ocean that they create within the hall.

The 16mm movie loops worked really well as, quite often, there wasn’t very much to watch. Apart from several people standing on the stage playing instruments, which makes the experience a little like listening to an album, but really loudly, so the movie loops seem quite necessary.

I took a little video, which is not great quality but gives a good idea of how the gig went as it was all along the same lines. 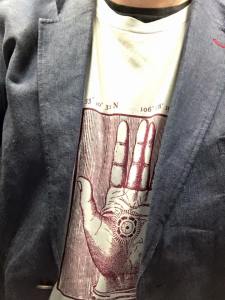 I thoroughly enjoyed the experience, although I will be a grumpy git about it further on, but I enjoyed it partly because it was what I was expecting and hearing the music recreated right in front of me was quite wonderful. Also, I bought a T-shirt, which is something I haven’t done, that I can recall, since Rush in 1981! I like it as a T-shirt though, not because it was band related. To be honest, there won’t be anybody around when I wear it who would ever make the connection anyway. Unless they read this of course, and most people don’t.

I’d like to make a brief mention of Apple maps, it is appalling. Perhaps partly my own fault for not paying attention, but I really didn’t want to go down single track roads and through tiny villages when I know there are A roads that would take the there. A google maps download means I will hopefully mean I never have to use it again.

Also, when did it become a thing to use the torch on your phone to find your seat? They were lighting up all over the place, which would be ok if the band hadn’t started, but they had and it was bloody distracting, as was all the people using their phones to take pictures, turn the bloody flash off! it will not help when you are in the dark and 50 yards away from your subject. There, grumpy gitness over.

This is a vieo that somebody else took: