You may recall a post a made about going to Reading Festival in 1983, I actually also went the year before, but only for the Friday, not the whole weekend.

I was 15 at the time and didn’t have a ticket, but a friend did, although he couldn’t go on the Friday so I took his ticket and the plan was that I would leave the site on Friday evening, remove the wristband and give it to him so that he could put it back on, which is exactly what happened. No drama really, not at that point anyway, the drama all happened earlier.

I was supposed to travel down with  a group of lads who were in a sort of secondary circle of friends, so not people I hung out with all the time but did now and again or one or the other of us would be in a group, not close but part of a wider group I suppose. I headed up to meet them early on Friday morning and they’s already left, which doesn’t surprise me at all, they were dicks. I caught the train from Didcot to Reading on my own, sitting opposite a long haired guy with a hard shell guitar case, I didn’t recognise him though so I mostly ignored him. I had long hair myself back then, which I was going to post a photo of, but after a decent search I can’t find any, I’ll ask around and see if I can come up with something.

Anyway, I arrived at Reading station alone and as I left the platform I was collared by the police.  They took me into a side room at one end of a long corridor that led out of the station and proceeded to strip search me. Pretty much everybody that was leaving the station could see me getting undressed as one wall of the room was essentially a wire fence. I told the police I was only 15 but they either didn’t believe me or didn’t give a crap, they found nothing of course and sent me on my way.

I made my way to the site and the first band of the day was ‘Against The Grain’, never heard of them then or since, but the bass player there in the picture below, he was the guy sat opposite me on the train. 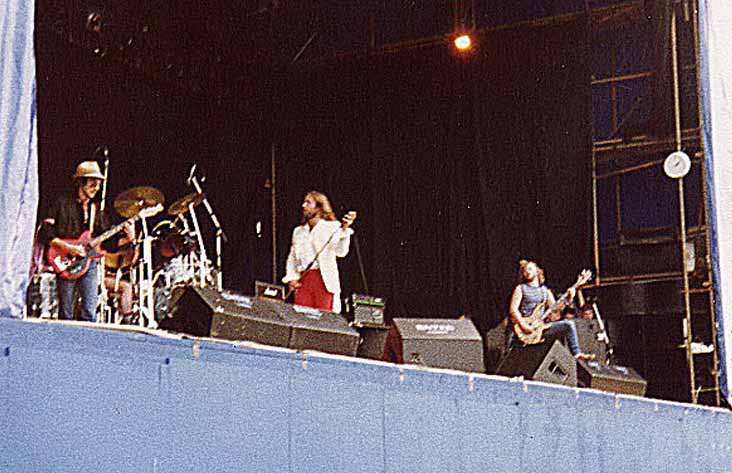 I was sat on the grass a little way back from the stage, there really weren’t many people there at this point and the band sounded decent. The drummer threw one of his sticks into the tiny crowd and one of us caught it, can’t remember who though. I bumped into the group who left without me almost as soon as I arrived, I could tell that they’d done it deliberately, it was pretty obvious, but I wasn’t going to let it ruin my day and just ignored it.

This is where things get a little hazy as I can’t remember the next three bands at all. The Angels, Stampede and Overkill, no idea whatsoever. I do remember Tank though as I had their album and, despite quite a number of people ridiculing me for it, even to this day (yes Dave, I’m looking at you). This is them back in 1982:

And this is them on stage at Reading in 82:

The album was called ‘Filth Hounds Of Hades’, which is nice, and it looked exactly like this:

I have a vague memory of ‘Praying Mantis’ and no memory of ‘Trust’ but I do remember ‘Randy California’, probably because I was wandering around the campsite and not really paying attention as I really didn’t like or know most of the bands on that Friday. The ones I really wanted to see were on Saturday and Sunday and I wasn’t going to get to see them. Here’s ‘Randy California’ recorded Live at Reading in 1982, somewhere, I’m in the crowd watching:

I’m also in the crowd watching ‘Budgie’ and listening to a pretty good quality recording of it right now, almost 35 years later. You can listen to if you like:

My Dad met me outside after the gig and drove me home, I didn’t want to leave, and if I was a bit selfish I didn’t have to, I could have stayed there, after all, I had the wristband, but I wasn’t. I did go to the whole thing the next year though of course.