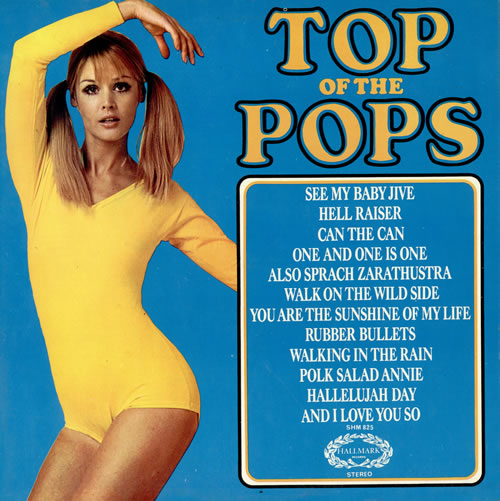 From 1968 to 1984 there were a huge number of cheap vinyl LP’s released that contained cover versions of popular songs of the day, and they were cheap, much cheaper than buying the 7″ singles themselves. I know we had a few, and I suspect most households in the UK that had a record player had at least one copy. They were everywhere.

The original idea came from a fellow called Alan Crawford, who called the series Top of the Pops after the most popular music program on British TV at the time, which, surprisingly, the BBC hadn’t copyrighted. A lot of people assumed the albums and the TV show were linked, but they weren’t, and it was great free marketing for the records. The price difference between a regular album and one of these was fairly hefty, with TOTP albums selling for £0.75 and a regular album selling for about £2.10. I suppose some folk didn’t realise they were all cover versions and some didn’t care. A couple of the albums even topped the album charts in their own right.

Probably chief among the cover artists who performed on the albums was a chap called Martin Jay, who recorded over 200 cover songs during the life of the series. According to Jay, it was his responsibility to go out and buy a copy of the original song and write the lyrics down by hand. Then it was into the studio where they would record 12 tracks a day. I found a video of several of the tracks that Martin Jay recorded for the series and you really can tell the difference, but I don’t think it mattered all that much as these albums were targeted at the parents and the younger children, who weren’t as precious about having the original.

Now I am a big fan of Ian Dury & The Blockheads so when I saw TOTP Volume 71 opened with it I thought I’d investigate the album and managed to find the actual version. If I am completely honest, I wish I’d never heard it as it’s bloody awful, but judge for yourself.

Oh God my ears are bleeding. More of a parody than a cover, and my ears can never unhear what they just heard.

I suppose these records served a purpose at the time, bringing cheaper music to the masses who couldn’t afford to buy everything that they may have wanted to in the charts, but what I remember most about these (apart from the scantily clad girls on the covers) was a sense of disappointment every time I heard one because when I was a kid I didn’t know they were covers and they always felt slightly wrong, which is what they were of course but sometimes I’d hear something on the radio or on TOTP on a Thursday night and then a little bit later the same track would be on one of these albums and I wouldn’t like it as much and not quite be sure why.

Nowadays they are quite collectible, or rather people do collect them, though if they ever listen to the damn things I’d be surprised.