My current obsession is with Trojan records and I have, despite knowing it is a terrible idea that will only lead to disappointment for me and pain for my wallet, begun looking for some of the early releases that are really rather difficult to find nowadays. I have made my first purchase, which is currently in tranist so I haven’t received it yet, and it is by Owen Gray, the 1969 album Reggae With Soul. The copy I bought is 48 years old so I have my doubts about how well it will play but the seller listed the vinyl as excellent so there’s hope. It normally sells for about £35 but my copy was £10, which is why I have some doubts but can’t really pre-judge. 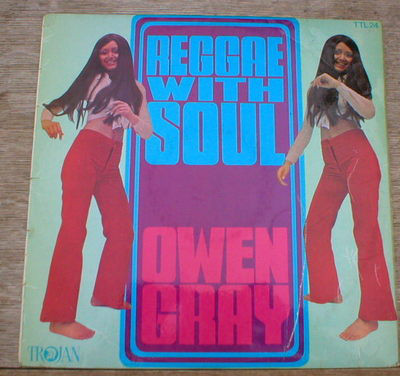 Just look at that cover, it is filled with happy. Owen Gray is one of Jamaica’s ‘Foundation’ singers whose work spans the R&B, ska, rocksteady, and reggae eras of Jamaican music, and he has been credited as Jamaica’s first home-grown singing star.

Gray won his first talent contest at the age of nine, and by the age of twelve he was already appearing in public, playing drums, guitar, and keyboards. He attended the Alpha Boys

School and turned professional aged 19. Gray was a dynamic performer on stage, who could be gritty or suave as the song dictated. He was the first singer (of many) to praise a sound system on record, with his “On the Beach” celebrating Clement Dodd’s Sir Coxsone Downbeat system in 1959, one of the first releases on Dodd’s Studio One label. He was one of the first artists to be produced by Chris Blackwell, in 1960, and his “Patricia” single was the first record ever released by Island Records. His first single, “Please Let Me Go”, reached the top of the charts in Jamaica, and featured a guitar solo from Australian musician Dennis Sindrey who was a member of The Caribs, a studio band that played on many early Owen Gray recordings. The single also sold well in the United Kingdom, as did subsequent releases, prompting Gray to emigrate there in 1962. He toured Europe in 1964, and by 1966 he was well known as a soul singer as well as for his ska songs. During 1966, he worked in the UK and Europe with The Krew, then in 1967 with Tony Knights Chessmen. In the rocksteady era, he recorded for producer Sir Clancy Collins. His popularity continued throughout the 1960s, working with producers such as Clement Dodd, Prince Buster, Arthur “Duke” Reid, Leslie Kong, and Clancy Eccles, including work as a duo with Millie Small, with songs ranging from ska to ballads. He continued to record regularly, having a big hit in 1968 with “Cupid”. His 1970 track “Apollo 12” found favour with the early skinheads, and in 1972 he returned to Island Records, recording reggae versions of The Rolling Stones’ “Tumblin’ Dice” and John Lennon’s “Jealous Guy”, although they met with little success.

During this period, he regularly had releases on Pama and sister label, Camel Records, and one single on Hot Lead Records. He had greater success in Jamaica, however, with “Hail the Man”, a tribute to Emperor Haile Selassie, which was popular with the increasing Rastafari following. Gray spent a short time living in New Orleans before returning to Jamaica where he turned his hand to roots reggae, working with producer Bunny Lee, and achieving considerable success. In the 1980s relocated to Miami. He has continued to release new material regularly, often concentrating on ballads and Gospel music.

It’s surprising how far back I’ve been listening to some of the songs that were originally released in the late 60’s and early 70’s. There’s a load that I first heard by The Specials, here’s a list:

Then there are the Prince Buster tracks covered by Madness, The Prince which is an interpretation of Earthquake, Madness and One Step Beyond. There are covers by The Selecter, The Bodysnatchers and The Beat, but at the time I, and many others, had no idea these were other peoples songs.

Some of the songs I remember from when they were originally released, Everything I Own by Ken Booth for example, lots of Jimmy Cliff and things like Anthea & Donna Uptown Top Ranking, which was considered a bit of a novelty by many when it was released, myself included, but damn it was catchy and ting. There’s Wonderful World, Beautiful People by Jimmy Cliff, I remember that and I’ve convinced myself I heard Young Gifted & Black by Bob & Marcia at some point.

There was Israelites by Desmond Dekker and The Aces which I first remember hearing when being used for a Maxell Tapes advert in the early eighties, where they took the mickey out of the lyrics, I just looked for it, this is it:

Get up in the morning, slaving for bread, sir
So that every mouth can be fed
Poor me Israelites, ah

Just because I’m on the subject, the one where they used Into The Valley by The Skids was pretty funny, “There’s masses of Lamb”:

This all started again when I bought a used copy of The Harder They Come soundtrack by Jimmy Cliff, having liked it so much I started looking out for more in the same genre, a potential mistake as there is just so much to go at, so this needs a structured approach to avoid having to re-mortgage the house.

is the 50 best Trojan Records releases, so that has now become my list, not that I expect to find all of them, but it is a decent steer as to where to begin.

I’m not going to list all 50, that is what the magazine is for but I will list out what my initial targets are along with the expected cost of an original and whether there is a re-issue available as Trojan have been through a re-issue program to celebrate their 50th anniversary. There was one bit of the accompanying article that I found quite interesting which was how quick the turnaround of the original 45’s was. Trojan is a British label and in the early days they would be down the local London market stalls listening out for whatever was new from Jamaica, the tracks that people were talking about from the previous weekend, and would press a couple of hundred of them within a week and then distribute them by hand before doing the whole thing again. I think this was when they were still Island Records, which Trojan was born from. Anyway, that list:

So that’s the starting point. There are many others which I will still be looking out for but that is looking like £150 right there, one has to at least give the impression of being sensible, right?