Back in 1981 the now defunct weekly music paper, Sounds, published an All-Time Punk Top 100 which I have recreated for you below using Spotify. If you play song 1 (which is 100 in the list it will play up to 100, which is number 1 on the list. A countdown is always better than a count up I think.

I think its fair to say that whoever compiled this Top 100 was rather fond of The Exploited as they appear 9 times but what it does show is that when the poll is created has a big effect on what appears in that poll. In the case of this one there is a glaring omission, well several, but the biggest must be the absence of The Ramones. That’s the thing with then and now, then there wasn’t access to everything and as we had plenty of home grown punk music to listen to why go further afield? To be fair though, there isn’t any Buzzcocks either, or X-Ray Spex so its difficult to see what criteria was being used but I would suggest that time is a big factor as we look back on that period some songs remain fixed in the memory and others have faded. This is demonstrated by Sgt Peppers Lonely Hearts Club Band, once considered the best album ever made but as each year goes by it slips further and further down those charts and is often overtaken by Revolver, which I agree with, it’s probably my favourite Beatles album.

If I was compiling my own list it would be very different, but I wouldn’t have remembered the Anti-Nowhere League and I should (they did a great ‘Streets Of London, I’ll put it at the end of this post). 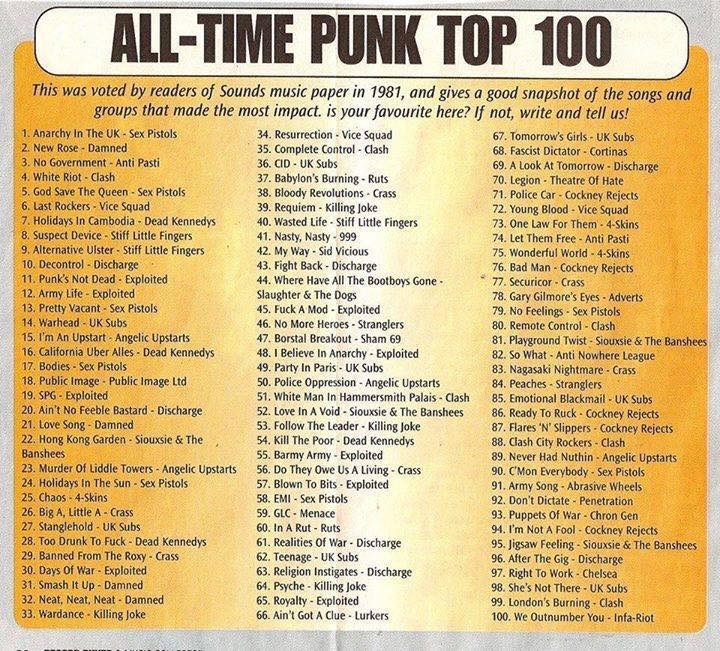 I was not really a punk at all at the time, I was too young really, but I did listen to a lot of these tracks and still have some of them. At some point I’ll find a more recent top 100, there’s bound to be one out there, and put it here for comparison.

Actually, here’s So What as well, which comes with a warning, the lyrics are appalling and hilarious in equal measure, move on if easily offended: